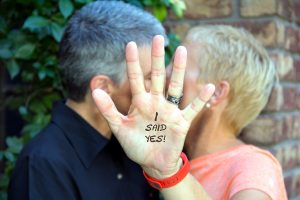 Our firm is very receptive to the needs of members of the LGBTQ community, and estate planning has traditionally been especially important to committed gay couples. This was before same-sex marriages were recognized by the federal government. At that time, legal steps were necessary to protect rights that should have been inherent.

For example, if you were to die without any estate planning documents at all, the probate court would step in to provide clarity. A personal representative would be appointed to take care of the administrative duties, and the court would provide supervision throughout the process.

After final debts were paid and everything was in order to the court’s satisfaction, the assets that comprised the estate would be distributed in accordance with the intestate succession laws of the state. Under these circumstances, a surviving spouse would be first in line.

As estate planning attorneys, we would never advocate intestacy, because it is important for everyone to have a custom crafted plan in place. This being stated, many people simply procrastinate, and there are those who pass away unexpectedly when they are relatively young.

Back in the day when people of the same gender could not get married, these protections did not exist. If a committed life partner was to pass away without any estate planning documents, the surviving partner would be left out in the cold.

There is also the matter of medical decision-making. If a person was to become incapacitated and unable to communicate, the next of kin would be asked to make decisions on behalf of this individual. Unfortunately, someone’s life partner could be completely left out of the decision-making process.

When it comes to monetary asset transfers or health care matters, with the proper estate planning, gay couples could protect themselves in advance, and of course, they still can. Today, though planning is still highly recommended, there are certain rights that are built in for people who are legally married, regardless of sexual orientation.

The pathway toward federal recognition of same-sex marriages began with a legal case that was brought forward by a woman who is now deceased named Edith Windsor. She married her partner of 40 years, Thea Spyer, in Toronto, Canada in 2007. They were New Yorkers, and the Empire State started recognizing same-sex marriages in 2008.

Just a year later, Spyer passed away with a significant estate, and she left everything to her spouse. There is a federal estate tax marital deduction that allows for unlimited tax-free transfers between spouses.

In spite of the fact that Windsor received the inheritance from her spouse, the federal government contended that she was on the hook for a hefty estate tax payment. Edith Windsor initiated a legal action, and the case wound its way through the lower courts until it landed on the docket of the highest court in the land.

The federal statute that prohibited the recognition of same-sex marriages was the Defense of Marriage Act that defined marriage as something that could only exist between a man and a woman. A majority of the Justices determined that the law was in violation of the Fifth Amendment, and it was struck down.

Since then, same-sex marriages have been recognized by the federal government. As a result, married members of the LGBTQ community have all the same rights and responsibilities that are afforded to heterosexual married couples.

We have taken a look at one historic case with estate planning implications here, and it is a very important one to say the least. If you would like to take your knowledge to another level, we have some fantastic opportunities coming up for you in the near future.

Our firm has scheduled a number of workshops, and you can learn a great deal if you attend one of these sessions. There is no admission charge, but we ask that you register in advance so that we can reserve your seat. To see the dates and obtain registration information, visit our workshop schedule page.