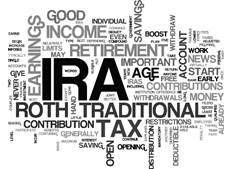 Retirement assets may be a very large part of a person’s estate at death. It’s important to consider the income tax ramifications of naming a beneficiary, as well as protecting those assets for the beneficiaries. This article considers some of these issues.

People work much of their lives to accumulate assets, often in tax-favored vehicles such as IRAs, Roth IRAs, 401(k)s, and other retirement plans. It’s often desirable to stretch-out withdrawals from these assets, not just during the “Participant’s” life, but long after their death. (The Participant is the person who contributed to it during their lifetime.) These types of assets may be the bulk of the assets in the estate, other than the home. So, handling these assets properly is essential.

This week, we’re going to look at how retirement assets should be left, both from an income tax perspective and for other reasons.

First, let’s look at the income tax issues. Retirement assets may be taxable-deferred, like a traditional IRA or 401(k). Or, they may be tax-free, like a Roth IRA or Roth 401(k). (With such plans, the income taxes have been paid up-front.) Either way, there’s more bang for the buck if you can stretch withdrawals to the extent possible. The beneficiary’s life expectancy is used to determine the possible stretch. The younger the beneficiary, the longer the stretch. An 18-year-old has a life expectancy of 65 years, whereas a 70-year-old only has a life expectancy of 17 years. The beneficiary must take a Required Minimum Distribution each year. Generally, the required distribution is the account balance at the end of the prior year divided by (the beneficiary’s life expectancy at the Participant’s death less the number of years since the Participant’s death). So, the required distribution is much greater for older beneficiaries and increases each year.

Next, consider the likely future income tax bracket of the beneficiary. Let’s say Mary has two children, John and Susan, who are her beneficiaries. Susan will be in the top tax bracket when taking distributions, John will be in a very low tax bracket. Let’s also say Mary has two IRAs, one is a traditional IRA and one is a Roth IRA. If Mary leaves the traditional IRA to John, he’ll pay less tax on it than if she left it to Susan. The tax-free nature of the Roth would benefit Susan more than it would John. Of course, Mary would still need to consider the income taxes John would be paying if she wanted equal value to each beneficiary.

Finally, consider non-tax considerations. Mary could name a trust for John or a Trust for Susan and get divorce protection, asset protection, or even protection from future estate taxation.

For example, if Mary were concerned John might be a party to a future divorce, Mary might designate a trust for John instead of John individually. John could be the trustee of the trust and take distributions from the trust for his own benefit, but the assets could be his separate, non-marital assets and not subject to division upon divorce.

Similarly, if Susan were expecting to have an estate subject to estate taxation, Mary could name a trust for Susan’s benefit. Susan could be the trustee of that trust and could make distributions to herself pursuant to a defined standard in the trust. The trust would not be subject to estate tax at Susan’s death.

If Mary were concerned about creditor protection for one of her children, she could name a trust for them and have a third-party trustee manage the assets with a completely discretionary distribution standard for distributions to that child.

These tax and non-tax considerations should all be considered to arrive at a plan which best suits your needs and your beneficiaries’ needs. If you’d like to schedule a personal consultation with one of the attorneys at Gaughan & Connealy, call us at (913) 262-2000.