Home » Our Firm » Attorney and Staff Profiles » About Chris Gaughan 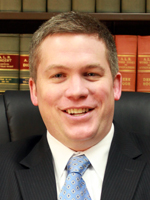 Known for his ability to provide a wide-range of custom estate planning services to his clients, with a primary focus on helping them provide for the security of their loved ones, reduce estate taxes, and minimize or avoid the costs and delays of probate, Mr. Gaughan prides himself on the lifelong relationships he forms with each and every one of his clients.

He is frequently invited to share his expertise and knowledge of estate planning with peers and financial professionals alike. Recently, he has presented on various estate planning issues for the National Business Institute, Rockhurst University, the Financial Service Professionals of Kansas City, Edward Jones, Morgan Stanley, Ameriprise Financial, and Country Financial. He is an established member of the prestigious American Academy of Estate Planning Attorneys and the Kansas City Metropolitan Bar Association, as well as the individual Missouri and Kansas Bar Associations.

A proud alumnus of the University of Missouri-Columbia School of Law, Mr. Gaughan also earned his Bachelor of Science in Accounting from Rockhurst University and refers to his undergraduate degree for Estate Plans with complex tax planning.

Happily married for nearly a decade, Mr. Gaughan spends his spare moments frequenting local eateries with his wife, Kristin, watching 80’s films with his three young children, and smoking meat on his back patio.

Personal
Chris has been happily married for seven years. He has three children, two sons and a daughter.

Education
Chris received his Bachelor of Science in Accounting from Rockhurst University in Kansas City. He then attended law school at the University of Missouri-Columbia School of Law. During law school, he was a member of the Missouri Environmental Law and Policy Review, and received several awards related to his studies in insurance law.