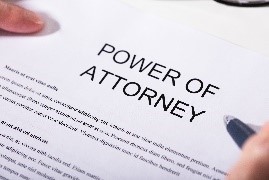 First, what’s a Power of Attorney? It’s a document by which you appoint someone as your “Agent” to act on your behalf. If that Agent is unwilling or unable to act, the document can appoint one or more successor Agents. In other words, you give someone else (the Agent) powers you inherently already have yourself. With a Financial Power of Attorney, otherwise known as a General Durable Power of Attorney, you appoint your Agent to make financial decisions for you. The Power could be drafted to be “immediate.” In other words, the Agent would have the power to make decisions regarding your financial assets right away and without regard to your ability to make those decisions for yourself. In most states, you could make the Power “springing,” in other words it would only become effective upon your not being able to act for yourself because of incapacity. A Power of Attorney is “durable” if it continues notwithstanding you having incapacity. A Power of Attorney which is not durable would not allow your Agent to act during your incapacity.

Let’s look at an example:

Mary is going to Europe for a semester abroad. She has a car which she wants her father, Harry, to sell for her. She signs a Financial Power of Attorney in which she appoints Harry as her Agent. The Power would need to be immediately effective as Mary is not expecting to have a period of incapacity. She could have the Power prepared so that it is specific to the sale of her car. Or, Mary could have the Power prepared as a general power.

Let’s look at another example:

With these Powers of Attorney in place, Mary can travel to Europe and rest easy that Harry will be able to sell her car for her while she’s hiking in the Alps. Meanwhile, Harry can rest assured that his Power of Attorney will enable Betty and Mary to act for him if needed.

The next article in the series will focus on Healthcare Powers of Attorney and Advance Directives. To get your own powers of attorney and estate plan set up, call us at (913) 262-2000. Or email Info@MidwestEstatePlan.com if you prefer to schedule your consultation by email.

Chris Gaughan
Known for his ability to provide a wide-range of custom estate planning services to his clients, with a primary focus on helping them provide for the security of their loved ones, reduce estate taxes, and minimize or avoid the costs and delays of probate, Mr. Gaughan prides himself on the lifelong relationships he forms with each and every one of his clients.